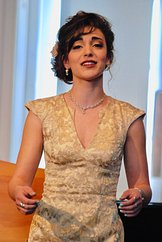 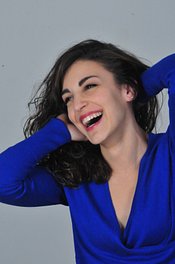 As a Sophomore, Micaela won the NATS regional competition, and in May 2017 performed a solo recital consisting of repertoire by Bach, Schubert, Mendelssohn, Fauré, and Copland.  She also sings with a blues band, which toured the Northeast in the Summer of 2015 and produced a full length album of completely original music in August 2015. She is honored to have received an undergraduate research grant (URSA) that will fund her project for the upcoming year on french composer, Gabriel Fauré's late period composition, and explore how modern gender and disability theory can be applied to his song cycle, La Chanson d'Eve.

After graduation, Micaela hopes to continue her education in Musicology and Ethnomusicology, and eventually possibly pursue a PhD.  She is also interested in projects that bring accessibility to the world of classical music, and is working with her love of french and contemporary repertoire to begin a series of collaborations between musicians who specialize in different genres.  Ultimately, the community and friendships that she formed in the Torrington High School band, choir, and theater department, are a large part of the foundational support that allowed her to pursue music at a high level.

Thank you, I am forever grateful.

Micaela Bottari, Torrington High School graduate of 2014, is now a senior Vocal Performance major at Westminster Choir College in Princeton, NJ.  As the only choir college in the world, Westminster is contracted by both the Philadelphia Orchestra and the New York Philharmonic.  In the past year, Micaela has performed at the Kimmel Center several times under the baton of Yannik Nezet Seguin, including works like the War Requiem by Benjamin Britten and Daphnis and Chloe by Ravel.  Most recently, she sang in Beethoven's Symphony No. 9 at Lincoln Center for Alan Gilbert's farewell concert.  Micaela is also a member of the Grammy nominated choir, Westminster Williamson Voices, conducted by James Jordan.  Over the past two years, the choir has produced three full length albums under the guidance of James Whitbourn.  Also in the past year, they sang Arvo Pärt's Kanon Pokajanen at The Metropolitan Museum of Art, being the first collegiate choral ensemble invited to perform there.  Micaela appeared as a soloist for this performance, and on the album A Carolae Christmas released in November of 2016.  In July, Micaela will travel to Oxford, England with Williamson Voices to participate in the Choral Institute at Oxford, which is an annual highlight.